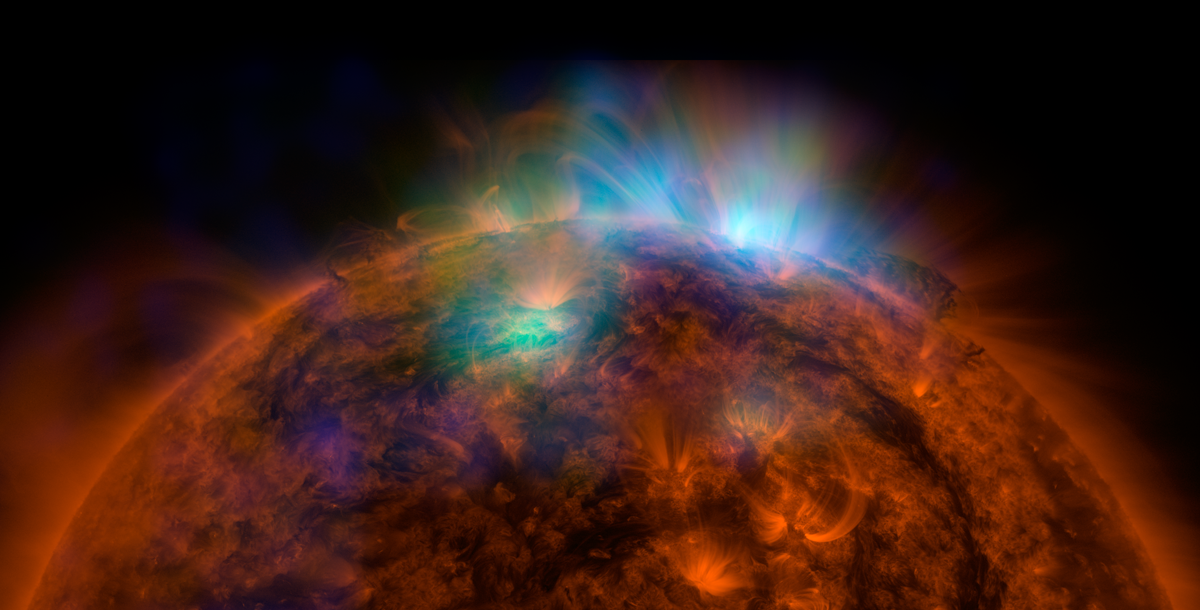 The Sun as seen in X-rays. Images taken by the NuSTAR (Nuclear Spectroscopic Telescope Array) satellite telescope were superimposed on an image taken by SDO (NASA Solar Dynamics Observatory).

Are you here? Let’s go then.
Look at the Sun – you can do that here, not to worry – look how it’s been burning in the past, over 8 minutes ago. Because, you know, when you look at the sky, you’re not looking at the now.
What a star! A source of warmth and shadow, lively colours and squinted eyes, freckles, burns, headaches, fainting. The energy that you can feel inside your illuminated body during the summer and the electrical one transformed in the solar cell. The key component of photosynthesis – a source of food that, when coupling with just the right amount of water, drives plants to growth and fruition.
The Sun works from the past. Its energy, subjected to millions of years of change, results in oil, coal, and natural gas. All accumulated in the abused body of the planet. In the light of the Sun, the snow glitters. Other times the sunlight comes across a dry forest bed or empty glass bottles and destroys whatever it can burn.
One day, an old and enlarging Sun will burn the Earth itself. By then, people will have been gone for a long time. In the meantime, the Earth’s star continues to nourish the planet, which however, has started to be more and more nervous in recent years. Humans deconstruct Earth’s conditions much faster and more effectively than the Sun does.